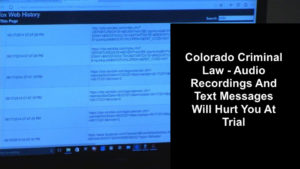 Colorado Criminal Law – Audio Recordings And Text Messages Hurt You At Trial – In many Colorado criminal cases, especially violent crimes and assault cases, the admission of evidence emanating from the Defendant, can be devastating. That is why criminal defense lawyers warn their clients, never, ever, contact the alleged victim in a case because in today’s world there are too many ways to leave damaging evidence that will later be used at trial.

Despite the fact that the jails in Colorado have signs at the phone banks that warn inmates that all phone calls are recorded – incriminating calls are still being made and later used against Defendant’s at trial.

The admission of this evidence at trial is a very simple matter for the prosecutor.

To admit these recordings – and all audio recordings generally – the proponent must demonstrate that the recording is an accurate reproduction of the call that occurred through a witness who can vouch for either:

(1) the accuracy of the content of the call or

(2) (if no such witness is available), for the reliability of the recording process.

While the “authentication” of audio recordings is always a condition precedent to the admissibility of this evidence at trial, laying the foundation to admit (get the evidence “in” – before a jury) is easy.

Under the Colorado Rules of Evidence (CRE) 901, the authentication foundation – the condition for the admission of the evidence – is satisfied by evidence that is…

“sufficient to support a finding that the matter in question is what its proponent claims.”
CRE 901(a)”

To lay the proper foundation for the authentication of a recorded telephone call – the proponent- the side seeking to admit the evidence at trial – must only demonstrate that the recording is an accurate reproduction of the call that occurred. In the case of a telephone call, that means the sounds or words — are those which are familiar to the witness. See CRE 901(b)(1)  The law only requires that the proponent of a recording verify the content of the telephone call and the process by which it was recorded.

To move forward with this kind of evidence, the State usually calls a “percipient” (eye and or ear witness) witness. This witness is almost always either a party to the call or someone who has listened in as the call as it was recorded. The testimony of a participant or witness that a recording is a complete and accurate reproduction of conversation is a “well-recognized way” to lay sufficient foundation

Defense issues – challenges here might be to ask these questions:

What was the “competency” of the operator of the equipment?

What was the “fidelity” (the reliability and clarity) of the recording equipment?

Is there any absent material? (completeness of recording)

Were there any material deletions? additions, or alterations in the relevant portions of the recording, and

Can the identity of the relevant speakers be determined with sufficient clarity?

The admission of audio recordings is analogous to the admission of other electronic evidence such as a photograph or a videotape. Where is no witness available to testify that they heard the crucial information being recorded, then the recording must be authenticated by the ‘silent witness’ process.

Authentication Of Text Messages Under CRE 901(a).

It is then argued at the time of offering the text messages at trial that the content of the text messages and the victim’s responses, if any, include internally consistent “corroborative evidence” that establishes that they could only have come from a unique source – the Defendant.

When these things occurs, the text messages have been properly authenticated and are then admitted into evidence and published to the jury.

The typical text message fact pattern is where a dating couple has an ongoing relationship for a period of time. There is a break up. The alleged victim communicates – clearly – that she no longer wished to communicate with the Defendant. The Defendant is alleged to have ignored her request and sends additional numerous harassing text messages – which may include implicit threats. If there is an extensive pattern of harassment – the crime charged may be felony stalking.

As with audio recordings, above, before evidence of text messages may be admitted, CRE 901(a) requires that the evidence be sufficiently authenticated by the proponent. And as with other forms of authentication the foundation to admit the evidence…

“is satisfied by evidence sufficient to support a finding that the [evidence] in question is what its proponent claims it to be.” CRE 901(a);

The burden to authenticate text messages ‘is not high, only a bare bones foundation, known as a “prima facie” showing is required. The foundation is similar to that for the admission of email.

Text messages and e-mail may be authenticated:

(2) “through consideration of distinctive characteristics shown by an examination of [the] contents and substance” of the e-mail under the circumstances of the case. CRE 901(b)(1), (4)).

For the admission of email and text messages, what typically occurs, is the witness testifies that:

(1) a printout of the contested e-mail or text message is a true and accurate copy of the message the witness had personally received from the purported sender.

(2) the witness recognizes the e-mail or phone number (text) as belonging to the purported sender, and

(3) the contents of the e-mail or phone number (text) indicates that it came from the purported sender.

Authentication, then, can be accomplished through testimony from someone with personal knowledge of how the information was obtained, or through an examination of distinctive characteristics in the content or substance of the information – whether that is an email or a text message.

A Trial Court’s evidentiary rulings are reviewed, if appealed, for an abuse of discretion.

That means that the Judge’s decision is well within his or her discretion and will amost never be overturned on appeal.

A Trial Court abuses its discretion when its ruling is…

(1) based on an erroneous understanding or application of the law; or

(2) is manifestly arbitrary, unreasonable, or unfair.

To admit text messages at trial:

First, a witness with personal knowledge will testify that printouts of text message(s) accurately reflect the content of the message(s).

Second, a witness with personal knowledge will provide testimony establishing the identity of the purported sender of the text message(s) (as follows).

Identity may be established through a combination of at least two of the following:

(1) the phone number was assigned to or associated with the purported sender;

(2) the substance of the text message(s) was recognizable as being from the purported sender;

(3) the purported sender “responded to an exchange in such a way as to indicate circumstantially that he or she was in fact the author of the communication”; or

(4) there are other corroborative evidence under the circumstances that establish identify.

If you found any of the information I have provided on this web page article helpful please click my Plus+1 or the Share buttons for Twitter and Facebook below so that others may also find it.

The reader is admonished that Colorado criminal law, like criminal law in every state and at the Federal level, changes constantly. The article appearing above was accurate at the time it was drafted but it cannot account for changes occurring after it was uploaded.

If, after reading this article, you have questions about your case and would like to consider retaining our law firm, we invite you to contact us at the Steinberg Colorado Criminal Defense Law Firm – 303-627-7777.

Never stop fighting – never stop believing in yourself and your right to due process of law. You will not be alone in court, H. Michael will be at your side every step of the way – advocating for justice and the best possible result in your case. H. Michael Steinberg is passionate about criminal defense. His extensive knowledge and experience of Colorado Criminal Law gives him the edge you need to properly handle your case 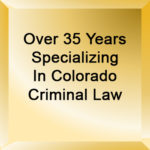 ABOUT THE AUTHOR: H. Michael Steinberg – Email The Author at:

“A good criminal defense lawyer is someone who devotes themselves to their client’s case from beginning to end, always realizing that this case is the most important thing in that client’s life.”

You should be careful to make a responsible choice in selecting a Colorado Criminal Defense Lawyer. We encourage you to “vet” our firm. Over the last 35 plus years – by focusing ONLY on Colorado criminal law – H. Michael has had the necessary time to commit to the task of constantly updating himself on nearly every area of criminal law, to include Colorado criminal law and procedure and trial and courtroom practice.

Putting more than 35 years of Colorado criminal defense experience to work for you.

H. Michael works hard to get his clients the best possible results in and out of the courtroom. He has written, and continues to write, extensively on Colorado criminal law and he hopes this article helps you in some small way – Colorado Criminal Law – Audio Recordings And Text Messages Will Hurt You At Trial.

Article Name
Colorado Criminal Law - Audio Recordings And Text Messages Will Hurt You At Trial
Description
In many Colorado criminal cases, especially violent crimes and assault cases, the admission of evidence emanating from the Defendant, can be devastating. That is why criminal defense lawyers warn their clients, never, ever, contact the alleged victim in a case because in today’s world there are too many ways to leave damaging evidence that will later be used at trial.
Author
H. Michael Steinberg